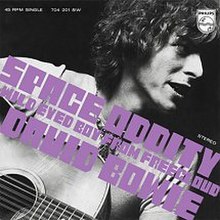 The brilliant Space Oddity, few are not familiar with. Whether it’s mastering or mixing differences (some will debate this sort of thing strongly), certain sounds are more prominent on the album version and the 1975 UK single reissue. For those that care about such things differences like that are a bonus / of interest.

However it’s the B side that makes this single more worth seeking, an acoustic song,
with a spoken introduction on this single, “The Wild Eyed Boy from Freecloud with
Paul Buckmaster on Arco bass”

On the single, you can really feel the guitar, and the cello-like bass. Haunting and beautiful, a more expansive and slightly bombastic take of the song with strings appeared on the subsequent ‘David Bowie’ album (released as Man of Words, Man of Music in the US, and renamed ‘Space Oddity’ on re-release in 1972).

Space Oddity allegedly got its first public airing – at least beyond any performances at Bowie’s Arts Lab at the Three Tuns in Beckenham – being played through the PA in Hyde Park when the Rolling Stones played there on 5th July 1969.

The single was Bowie’s first bona fide hit, albeit one that did not change his fortunes in quite the way he hoped.